Book Review – The Benefit and The Burden (Tax Reform) 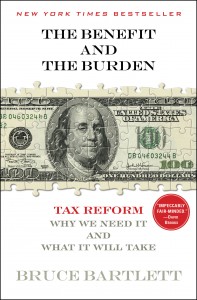 I feel odd recommending a book written about the American tax system to people who are, for the most part, Canadian.  However “The Benefit and The Burden:  Tax Reform – Why We Need it and What it Will Take” is written by former Reagan policy analyst Bruce Bartlett and he gives one of the most comprehensive examinations of that nation’s tax system.  Mr. Bartlett focuses on what has gone wrong and why reform, although needed, is so difficult to achieve.  I believe in learning from the mistakes of others and for this reason alone it is worth being read.  I also realize that, from time to time, Canadian accountants must deal with, or at least be aware of, the American tax system.  Knowing its roots and background can be a benefit.  Bruce Bartlett examines the history of the U.S. tax code starting with the need to raise money to fight the Civil War and why it allows certain deductions.  One being mortgage interest on homes.

A central problem is that people associate tax reform with less tax.  Less tax for everyone is not reform because the governments we support must still pay their bills.  If they (the federal, provincial, and municipal levels) are not able to do so then either there must be fewer benefits provided by them, or they must borrow.  Look to Greece for a good example.  Reform means that a tax collection system must be perceived as being fair and that distortions to economic activity be minimal.  Franklin Roosevelt considered the income tax act to be fair because richer people paid more and poorer people paid progressively less.   Years later Ronald Reagan had different ideas and it is his thinking that now predominates.

Economists, to some extent, agree on the best forms of taxation.  Concepts such as marginal tax rate and average tax are familiar to them (as they should be to you).  They also tend to agree as to when the income effect predominates (the average tax rate increases without change to the marginal tax rate) and when the substitution effect (the marginal rate increases and the average stays the same) takes place.  However, economists do not write our tax laws, politicians do.  And these people have totally different agendas which are not always congruent with what is best for a nation.  When Bill Clinton left office there was widespread talk of a fiscal surplus and how soon the American national debt would be paid off.  However, George Bush, against the advice of prominent economists, lowered tax rates.  These have still not returned to their Clinton levels.  There is no longer any talk of a surplus in the United States, quite the contrary.  Here in Canada, Stephen Harper lowered the GST from 7% to 5% against the advice of leading economists at that time.  This happened despite that fact that Harper IS an economist and reason dictates that he should have acted differently.

Accountants are often asked to comment on tax and tax policy.  Even though we are as often confounded by the topic as anyone else.  The exception being those of us who specialize in this area.  Because of all the misconceptions that abound, it is an area where we should strive to know the facts.  Also, it is important to know what works in given situations, what does not, and why.  Companies depend on us to take advantage of all tax incentives so we must know what is happening and, if required, how to approached legislators and ask that appropriate changes be made.

There is an election due this year.  As usual there will be promises and misinformation in an attempt to get our votes.  To discern what will be viable alternatives from the misguided attempts to sway votes, it helps to know what worked in the past, why it was tried, what failed, and why they fell short of expectations.  This is why I feel Bruce Bartlett’s book is a good start.  It is only a start.  Knowledge of how our government raises revenue should be ongoing because society changes and so will government.  When Lincoln became president 90% of the U.S. budget came from tariffs.  Our situation is vastly different now and no one knows what it will be like in another hundred years.  Also, the U.S. should not be the only basis of comparison.  Other industrialized countries have come up with new and unique forms of taxation.  We should be studying their effectiveness and determining what would work in Canada.