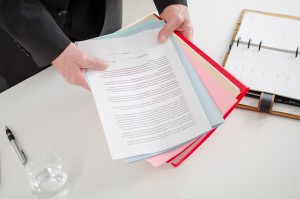 Businessman holding documents on his desk

Issue of clarifying how entities classify debt, especially when it comes up for renewal was originally discussed in Annual Improvements to IFRSs (2010-2012 cycle) whereby amendments were proposed to clarify that a liability is classified as non-current if an entity expects, and has discretion, to refinance or roll-over the liability for at least 12 months (after reporting period end) with the same lender on similar terms. In 2013, however, IASB instead of doing so; refined the existing IAS-1 guidance as to when liabilities should be classified as current. Now IASB has published an exposure draft of proposed amendments to IAS-1; whereby general approach to classifying liabilities between current and non-current is aimed at.

Rights to defer settlement are rarely unconditional, because such rights are often conditional on compliance in future periods with covenants made by the borrower. In order to address this inconsistency, word ‘unconditional’ is deleted

Only rights in place at the reporting date should affect the classification of a liability.

When a right is subject to a condition, then whether the entity at the end of reporting period complies with that condition or not determines whether the right should affect classification.

Para 74 to 76 are omitted and the content is now included in below renumbered paragraphs so that similar examples are grouped together:

Para 72R: examples of circumstances that create a right to defer settlement that exists at the end of the reporting period

Para 73R: examples of circumstances that do not create a right to defer settlement that exists at the end of the reporting period

Rollover of the borrowing does not constitute ‘settlement’ and would not result in the liability being classified as current. Thus it was important to link settlement of liability with outflow of resources

This is in line with IAS-1 as:

BIO – Zeeshan Rafiq is a 30 year old Chartered Accountant from Pakistan. He is also a Certified Internal Auditor (IIA) and Masters in Economics. He is currently working as Chief Internal Auditor for a multinational textile manufacturer for 6 years with past experience in KPMG Pakistan. He occasionally writes on auditing and accounting matters and can be contacted at m.zeeshanrafiq@yahoo.com